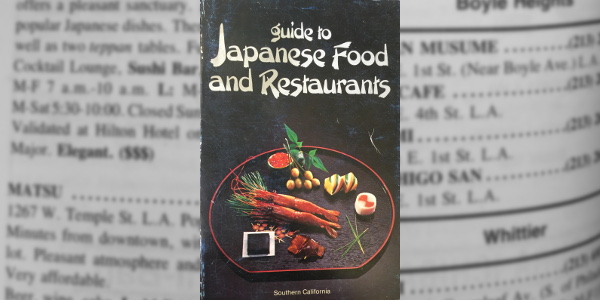 This is an amazing little find: a book published in 1980 that explains sushi and Japanese food, and then lists a lot of the Japanese restaurants in Southern California at the time.

Japanese restaurants were a moneymaking business for both the newer shin-issei as well as the older Japanese American community. You can read between the lines and find, in the listings, restaurants that existed in the old JA communities like Boyle Heights, Gardena, North Hollywood, and Sawtelle.

Many of these older restaurants are still in business. Some have closed due to the pressures of gentrification, but some have thrived. Some, like Otomisan, hang on as time capsules of the past.

The sushi in the photos was prepared by Kazunori Nozawa, long before he became a famous name in the Los Angeles elite sushi scene.

From Nozawa’s history on his site:

In 1987, Nozawa learned that a location had become available in the affluent San Fernando Valley town of Studio City. He was eager to open his own restaurant where he could serve authentic, traditional sushi in a simple, no-frills setting using the highest quality seafood. Many of his Japanese friends discouraged him, insisting Americans, accustomed to California rolls and other popular variations, would not appreciate Tokyo-style sushi. In spite of their opinions, Nozawa could not be dissuaded, and Sushi Nozawa was born.

So this was published during a period when Nozawa was acting as a consulting sushi chef to the growing Japanese restaurant business, teaching America about sushi.

Sushi Nozawa was not an immediate hit.

Three months of empty chairs in Nozawa’s new restaurant seemed to prove friends correct. But everything changed on January 1, 1988, after a rave review, “Code Is Strict At The Sushi Academy,” written by Jonathan Gold, appeared in the Los Angeles Times. The restaurant quickly became a destination for sushi lovers as word spread about this unique, intense, and deceptively simple dining experience.

The book also presents this balance of the “old LA” JA community restaurants, which served a kind of hybridized Japanese food that was partly of the community, and partly what local non-Japanese customers wanted to eat, and the “new LA” sushi appreciation community, which was a whole other thing.

I went through the book hoping to find the small restaurant in San Diego that my mother took me to in the 1970s, to eat sashimi. Believe it or not, sashimi was not widespread in the 1970s, even in the Japanese community.

As she told it, even in Japan, it wasn’t that common, because it was expensive. Postwar Japan, and WW2 era Japan, were, in her experience, impoverished. Even rice wasn’t available during the war. Fish was rare.

Of course, in the US, the west coast JAs were in concentration camps, and that’s a whole other thing, with a whole other food history.

In the US, even in the 1970s, sashimi it wasn’t a popular dish, so restaurants didn’t often serve it. The more common JA community dishes were picnic sushi like futomaki and inarizushi, and some places had the internment camp food like weenies and eggs. At the old shops, you’d find teriyaki, sukiyaki, yakitori, and maybe udon. At the shin-issei shops, you’d find teppan yaki, croquettes, yakisoba, gyoza, teriyaki, curry, ramen, and udon, which were popular crossover dishes.

The 1980s brought in high-end sushi in a big way – and I imagine most JAs had to learn this traditional style nigiri sushi like everyone else.

This book will be for sale soon.