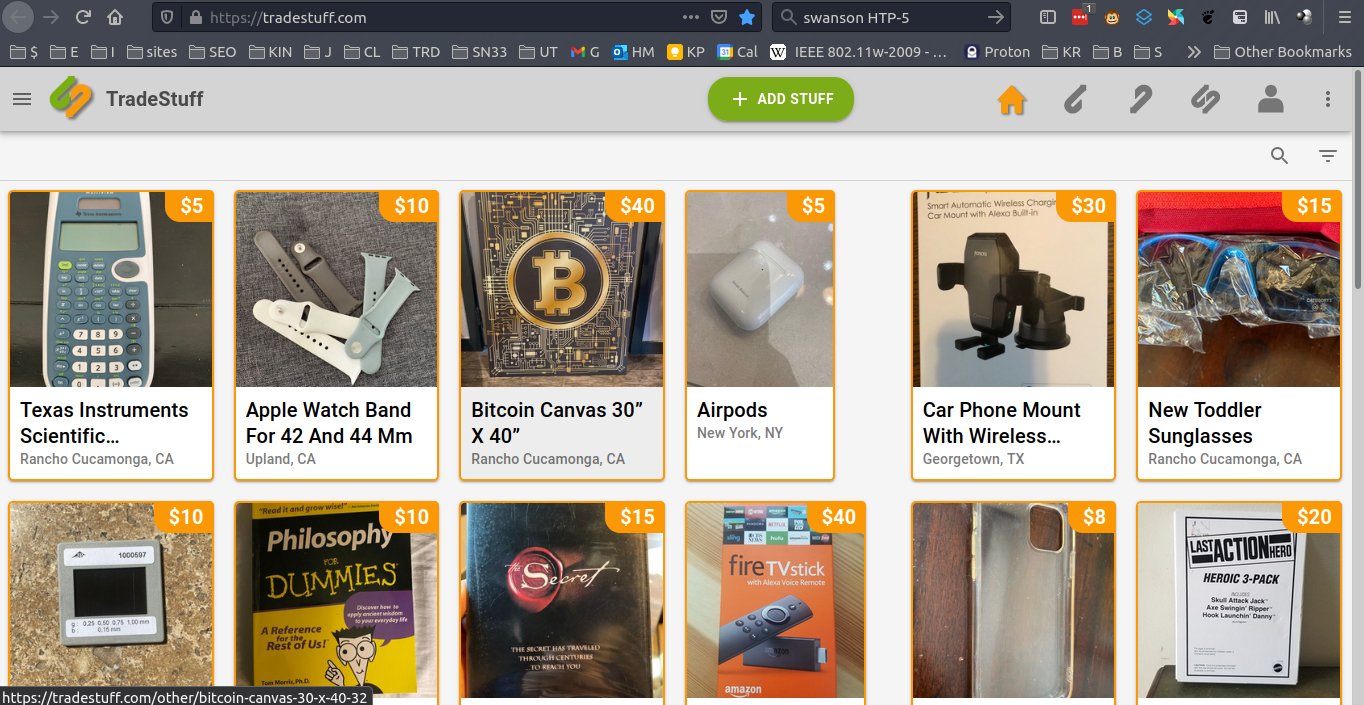 Tradestuff.com was listed in a “best barter sites” page. It used to be a large trading forum, but has been transformed into a seemingly inactive trading site. The most interesting thing is that it’s an app that uses the EOSIO blockchain.

What struck me about TradeStuff was that it had support for two really nice features: multilateral bartering, and dollar-based pricing to enable “value sharding”.

In plain English, “multilateral bartering” is bartering with more than one person, where the entire group, together, can satisfy each others wants (for goods), even when two people within the group don’t have a “coincidents of wants” and cannot make a trade between them.

“Value sharding” is a mechanism to set a price, and the combining trades so everyone gives and gets the same value of stuff.

(I’d been sketching out a similar kind of three-way-trade system, and was doing competitive research, when I found TradeStuff. It had exactly what I wanted, and a lot more features.)

I’m only now starting my journey on this platform. I think I’ll try to list a few dozen items, and then try to promote the site locally, hoping to find other traders.

At this time, the site looks experimental, so I’ll list cheap items, so the commitment from buyers is nice and low.

The listing interface was pretty simple, and I put some Levi’s 501 XX Made in the USA jeans up there. I priced them at $40.

They didn’t show up on the site. Why?

Because I didn’t have enough money “staked” in the system. A “stake” is cryptocurrency lingo that’s similar to “a share in the platform”.

With this site, I needed to put money into the system to get listed. That money is a kind of insurance against fraud, and also to cover customer fraud.

You can buy a stake in the system using a credit card.

Since the homepage showed only 24 items, I didn’t see much point in staking any money to make my listing go live.

I don’t think most prospective sellers will see any reason to pursue this platform, until they build up a huge amount of trading inventory.