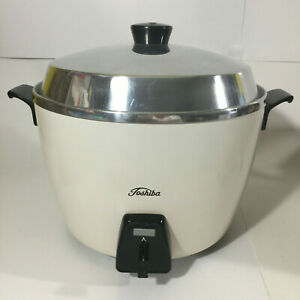 The Toshiba ER-8 is a larger version of the ER-4, the original rice cooker to gain widespread acceptance in the Japanese market.

The main difference from the later style is that there’s an outer pot and an inner pot, and the timing was controlled by adding water between the two pots. The water would boil, and the heat and steam would cook the food.

This design is no longer sold by Toshiba, but Taiwanese industrial Tatung has a copycat cooker that is still in production and can be purchased new for around $130.

I have listed mine for sale in the 300s, but others are selling these at much lower prices.

These are opportunities to buy historic products at low prices. It appears that, after the ER series, the product was given “RC”, which continues to the present day.

The early models employed the pot-within-a-pot style, rather than the single pot used in current cookers.

Seller ebernardo98 has two for sale:

The RC-180D may also be a pot-within-a-pot style cooker, but it’s hard to be certain.