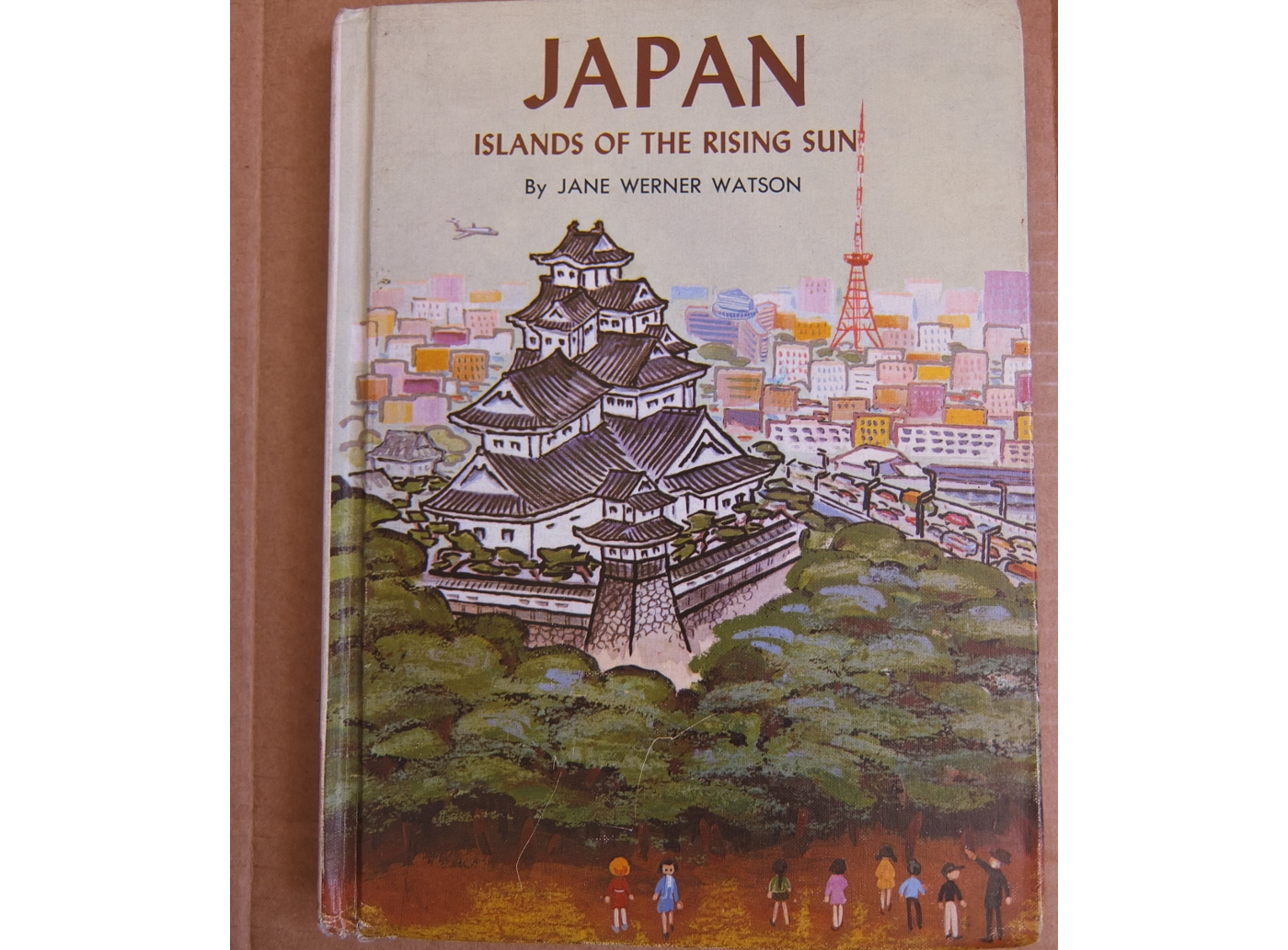 I found this library book at the thrift store, and bought it because it was 昭和レトロ Showa Retro USA. Published in 1968, this childrens book, written for elementary school readers, explained the daily life of people in Japan, described some of the traditional culture, described modernization, and covered some parts of history.

The history presented in this book, however, was deceptive.

Remember, this was 1968, during the Cold War, and Japan had been integrated into the US sphere of influence, and had (and has) military bases to threaten China.

The first thing that stood out for me was the story about the rebuilding of Tokyo after WW2, which was necessary after the massive US firebombing campaign which destroyed Tokyo. This incident wasn’t mentioned, directly, though the rebuilding was.

What did they have to say about the use of atomic bombs on Hiroshima and Nagasaki? Fortunately, the book provided an index, so I could quickly find all the references to the two cities, and see if the facts about the bombings were also minimized.

Interesting. There’s no entry for Hiroshima or Nagasaki.  There is an entry for Nagasaki under “Cities”, and refers to page 77. The page is part of a section about trade history and how Japan was closed off to foreign trade.

So, the bombings of Hiroshima and Nagasaki are not mentioned. These were the first, and only, uses of the atomic bomb, a significant event in world history, but it was completely omitted from this history of Japan, and also of the United States, in this book.

What about this book’s treatment of World War II? It turns out that there is a section that includes WW2. Given that it was the primary military conflict that defined the relationship between the two countries, and led to the US takeover of Japan, and the inclusion of Japan in the US sphere of influence, there must be something.

There’s approximately one page that covers the Empire of Japan, Japanese imperialism and colonization, World War II, Occupied Japan, and the reconstruction of Japan. It’s the period, not the facts that are described: of all those terms, only “World War II” is used.

US imperialist and trade interests in the South Pacific, as well as China’s participation in the war, are completely left out — but that’s still left out of history, so what can you expect.

Compare the fact that three pages were used to describe the period from 1542 to 1615, which might be called a period of Portugese attempts at religious imperialism, while Japanese imperialism and US imperialism and World War II merited only a single page.

Though this was a childrens book, and you cannot get into too much complexity with them, what amounts to the complete omission of World War II makes me wonder what’s going on here. There are different ways to critique this work, but I haven’t put in the mental energy to do so. You’re on your own.

This deceptive distortion of history is available for sale on Ebay or directly from me.

Thrifting and seeking in the Los Angeles area hasn’t been that great for glassware and ceramics, at least the well known kinds that show up online. Chicago, all of Ohio, and some areas of the East Coast seem to turn up great examples of cut glass, blown glass, ceramics, and lamps.

That’s largely due to the fact that the Los Angeles area didn’t get huge until the 1930s, and didn’t have many local potteries and glassworks. Then, in the postwar era, with imports restricted, the Los Angeles area, and some other areas, flourished, and there were hundreds of potteries.

Consequently, I find a lot of California pottery from the postwar era, and a little bit from the Depression era. So far, I’ve found Bauer, Metlox, Coors, Gladding McBean (Franciscan and Catalina), Maddux, and Weil.

I haven’t kept track of tile, but there’s a lot out there. You can find some of the well known items like Batchelder at some antique stores.

The heyday of California potteries ended in the 1960s, when relaxed import restrictions were lifted, and imports from Japan increased. US companies couldn’t compete with the less expensive imports.  I also find a lot of china from this period, often branded with companies from the Los Angeles area, but manufactured in Japan. This is the stuff I grew up with, and am most familiar with.

So, going backward in time to the 1940s and 1950s, is new to me. I have had some plates from that era, but not that many. We did use some, but, again, not that many. My mother was buying her stuff from the 1970s and onward, so, it was mostly imports like Mikasa.

Most of my current research about California pottery is studying the Kovels book about Depression Glass and American Dinnerware.

Being On the Lookout

I’m not starting to try and spot a few kilns that are local to me. First is Vernon Pottery, which would be maybe a mile or two from where I live.

Second is Pacific Pottery, which operated in Los Nietos, now a part of Whittier, and also had a plant in Lincoln Heights on Ave 26, which three blocks from a Goodwill, and the St. Vincents I frequent.  (The old plant was at the corner they call Ave 26 tacos.)

Both are prewar kilns, so their stuff isn’t plentiful today. I suspect the people who owned it all died, and their plates were in the thrift shops by the 1990s. I bet they are in antique shops.

I don’t buy much of the pottery, because it’s chipped. That harms the resale value. There’s plenty I’d like to buy, even with chips, but I wouldn’t be able to use them, because the glazes may contain lead or other harmful metals.

Colorware at the Maximalist – an excellent history.